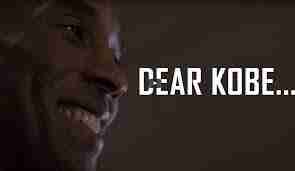 Right off the weekend of making my Motivational Monday Kobe video, Kobe does it again and dominates retirement. Kobe Bryant just won the oscars, amazing accomplishment and really just adds to his resume. I made a video inspired by a post I saw on r/NBA drops some hints on the Social Media page but the full video can now be watched on the channels and directly below. Check out The Kobe Bryant Short Film below!

Kobe Bryant‘s actually did it, and add another one to his illustrious resume: Oscar winner.

Kobe brought home an Academy Award for the animated short film category yesterday for his executive producer role in Dear Basketball.  The film chronicles Bryant’s basketball career, starting from when he was a child, and into his stardom with the Los Angeles Lakers.
Bryant was nominated with animator Glen Keane, who is known for his work with Disney films such as The Little Mermaid and Beauty and the Beast

took home an Academy Award in the animated short film category Sunday for his work as the executive producer of Dear Basketball. The piece journeys through Bryant’s basketball career, starting when he was a child and venturing into his stardom with the Los Angeles Lakers.

It was nominated for the 90th Academy Awards at the Dolby Theatre in Hollywood, California, alongside Garden Party, Lou, Negative Space and Revolting Rhymes.

Bryant was nominated with animator Glen Keane, who is known for his work with Disney on films such as The Little Mermaid and Beauty and the Beast.

The film covers his written letter when he announced his retirement. Seeing it animated adds to the emotions, as being a basketball fan, this letter hits the nail in the head of what is like to be passionate about a sport and want to give it your all to become the best you can be.